Currently one of the NTFL's strongest and most consistently successful clubs, Ulverstone has a proud and illustrious history dating back to 1888.  Originally known as the Leven Football Club, it changed its name to Ulverstone in 1890.

The early years of the club are not particularly well documented, but it is known that Ulverstone competed in a variety of different Leagues and Associations, notably the North West Football Association between 1894 and 1908 where it was successful in winning 3 premierships from 4 grand finals.

North west coast football during the early years of the twentieth century could be tempestuous in the extreme.  A game between Ulverstone and Mersey at Ulverstone on 18 July 1908 was a case in point.  The match was rugged and ill tempered throughout, but things finally got totally out of hand midway through the final quarter.  With Mersey leading by 21 points a flare up occurred after Ulverstone's Albert 'Nipper' Devlin was felled by his opponent, Gibbens.  Players from both sides rapidly converged on the scene, and random pushing and jostling soon escalated into an all out brawl.  When angry spectators began tearing up pickets from the boundary fence and running to join in the fray it was clear that a full scale riot was in progress, and the 5 policemen on duty at the ground raced to intervene.  However, despite the best efforts of both the police and the umpire the crowd could not be cleared from the oval, and the umpire was left with no option but to abandon the game. ​

Afterwards, as the train carrying the Mersey players and supporters departed Ulverstone station it was pelted with stones by an angry mob.  At the Association tribunal, 4 Ulverstone players ended up receiving bans ranging from 2 months to life, while a 5th player was fined 10 shillings in court.  However, the disqualified quartet were all able to return to the field in 1909 as Ulverstone, along with Penguin and Latrobe, broke away from the NWFA to form a new competition, the North West Football League, which gave way a year later to the NWFU.

Ulverstone was joined in the NWFU for its inaugural year by its 2 former NWFL compatriots, plus Mersey and Wesley Vale from the NWFA. In the grand final that year it had the satisfaction of overcoming bitter rivals Mersey by 23 points, 8.13 (61) to 5.8 (38).  Two further losing grand finals followed before football went into recess in 1916 because of World War One.

Ulverstone enjoyed modest success in the 1920s,'30s and '40s with sporadic grand final appearances and a single flag in each decade.  The team really came into its own during the 1950s, however, when players like Graham 'Chum' Saltmarsh, Arthur Hodgson, G.B. 'Paddy' Martin, Joe and Len Pearce, Jack Rough and Merv Smith helped steer it to 7 grand finals in 8 years between 1950 and 1957 for a total of 6 flags.  With the irrepressible Arthur Hodgson to the fore both on and off the field (as coach) the side also won its first state premiership in 1955 after wins over TFL premier New Town and Longford from the NTFA.

The strength of NWFU football at this time is further exemplified by the combined team's success in 1955 in winning the Tasmanian intrastate championship for the 3rd consecutive time.  Needless to say, many Ulverstone players made prominent contributions to this achievement.

After the lucrative excitement of the 1950s the following decade proved to be a barren time for the Robins despite their playing off on grand final day no fewer than 5 times.  The 1970s were similarly unprofitable with the exception of a stellar 1976 season which saw the club win both the NWFU and state premierships.  In the local grand final, steadiness in front of goal helped procure a 32 point victory over Penguin, while in the state final the Robins proved too strong for Launceston.  Sadly for Ulverstone, victory in the state premiership was no longer a passport to national exposure via the Australian club championships in Adelaide as, in 1976, the competition had been superseded by the NFL-Wills Cup, featuring teams from Victoria, South Australia and Western Australia only.  In a small way, Tasmania's ostracism from what, until now, had been a more or less guaranteed position of centrality and importance in the Australian football universe had begun.

The structure of Tasmanian football, too, was changing.  The state premiership was contested for the last time in 1978, with the intra state premiership likewise disappearing the following year.  In 1980 Tasmania's 21 senior clubs joined together to compete in a knock-out series sponsored by a cigarette company.  The series was not a financial success, but it was patently clear to most observers that Tasmanian football was being nudged (some would say forced) in the direction of statewide competition.

Ulverstone won its 12th NWFU premiership in 1986 with a grand final defeat of Wynyard on a very memorable day for the club at Devonport. It was our centenary year and we achieved a finals treble, winning U19's, Reserves and Seniors. In fact, we were the first club to achieve this record in the present-day format and in fact are the only club to have done so on several occasions, the last being 2000. This proved to be the last ever NWFU grand final, as the following year saw the establishment of new competition, the Northern Tasmanian Football Club.  Formed in the wake of the defection to the newly created TFL statewide competition of NWFU sides Burnie and Devonport in 1987, following North Launceston's and South Launceston's departure from the NTFA the previous year, the NTFL comprised the remaining former NTFA and NWFU clubs.  As far as Ulverstone was concerned, however, it was business as usual, with a 13.19 (97) to 12.12 (84) grand final victory over East Devonport procuring the club's 2nd successive flag.

Since then, the Robins have gone on to become by some measure the League's most successful club, winning a further premiership in 1990 followed by a spectacular 5 in a row between 1993 and 1997 and then, for good measure, an 8th NTFL flag in 2000.  The arrival in the competition in 2001 of former statewide heavyweights in the shape of Burnie Dockers and North Launceston has made life harder for Ulverstone, but the side continues to perform creditably.  Moreover, irrespective of what the future brings, the club has a history and a tradition of which to be proud, a fact exemplified by its refusal to follow the lead of so many other clubs in supposedly 'inferior' Leagues throughout Australia and subordinate its own identity to that of one of the AFL 'superpowers'.  Its players may take to the field in playing uniforms similar to those of Essendon, but they are categorically not Bombers, they are Robins, proud of the unique tradition they perpetuate and honoured to be representing one of Tasmanian football's truly great clubs.

Max Brown | Coached Ulverstone to an unbeaten Premiership in 1993

IN 1955, the North-West became the dominant force in Tasmanian football, thanks to Ulverstone.

Ulverstone's 1955 state premiership win over Longford was yesterday announced as the fifth memorable game to be inducted into the Tasmanian Football Hall of Fame.

Coached by the legendary Arthur Hodgson, and sporting such players as GB "Paddy" Martin, Jock French, Garth Smith and Bruce Pearson, the Robins presided over the beginning of an outstanding era for Coastal football.

It was only the second year the NWFU had been part of the state premiership title against the North and the South, and the dominant Ulverstone side had demolished a seemingly unbeatable Newtown team in the semi-final to reach the Coast's first title play-off.

The hearts of Coastal footy fans were with the Robins when they went to York Park for the title battle, and 10,000 spectators watched the big win.

Ulverstone was captain- coached by former Queenstown boy Arthur Hodgson, who had returned from a highly successful stint in the VFL with Carlton, and Longford was also coached by an ex-Carlton champion in ruckman Fred Davies.

The first test for Longford was to counter the brilliant running play of Hodgson on the expanses of York Park's wing.

They had just the man for the job in Gus O'Brien, who nullified the "Black Prince" early.

However, Longford could not curtail the rest of the Ulverstone mosquito fleet who were dominant in the first half of the game.

The third term was the pivotal period of the game.

Longford twice drew even on the scoreboard, but Ulverstone prevailed with fitness and pace the key.

The official induction of the game will be on July 3 at the Hall of Fame gala function at Wrest Point Casino. 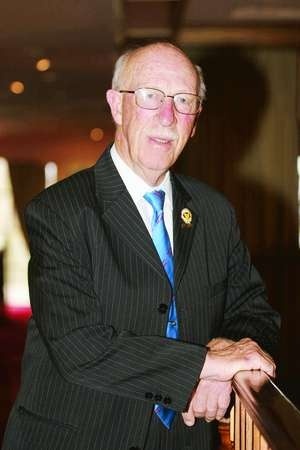 
The Red and Black attac


Remember this one? It made its mark